ACT 1   Magda, a courtesan, hosts a party in her Parisian home. Prunier, a poet, is explaining his theories of love, while Magda’s friends Yvette, Bianca, and Suzy tease him. Magda’s maid, Lisette, interjects that Prunier knows nothing about love. Prunier is offended, so Magda sends the maid away. Prunier returns to discussing his theory that no one is immune to romantic love. He tells the story of Doretta, a girl who rejected the love of the King because she believed that true love was more important. When he falters on on the song’s second verse, Magda steps in to tell how Doretta falls in love. Her guests are thrilled. Magda reminisces about her youth and recounts her working life and the fond memories of dancing at Bullier’s. It was there she fell in love for the first time. A handful of Magda’s friends tell Prunier that he should compose a new song inspired by Magda’s past, but he sayd he prefers more contrary heroines. He then changes the subject, grabbing the palm of one of the girls and insisting that he can read her future. During this, Lisette announces another guest – Ruggero. After evaluating Magda’s hand, Prunier tells her that she migrates to the sun and true love. Meanwhile, having never visited Paris, Ruggero asks where to stay and what to see and Lisette recommends Bullier’s. As the party ends, some guests head there for more partying. Magda tells Lisette that she is turning in for the night, but secretly, she has decided to disguise herself and go to Bullier’s too. Madga “retires” to her bedroom as Prunier returns in secret to take Lisette to Bullier’s. He is captivated by her and flirts constantly. Madga follows, eager for adventure.

ACT 2   At the Bullier’s bar, Magda enters and catches the attention of several men. To avoid them, she takes an empty seat and finds herself with Ruggero. He doesn’t recognize her when she apologizes for sitting at his table. She offers to leave him alone once the boys at the bar turn their attentions away. He asks her to stay as she reminds him of the quiet and reserved girls from his hometown. Prunier and Lisette arrive, arguing over Lisette’s lack of social graces. Alone at their table, Magda tells Ruggero about her first love. He asks for Magda’s name, and with a slight hesitation, she answers “Paulette.” They continue to talk and their attraction for one another grows. Prunier and Lisette approach and Magda signals to Purnier not to give away her identity. Prunier decides to join them at their table. He introduces Lisette to “Paulette,” and though confused, Lisette plays along. They all toast to love before Prunier sees Rambaldo enter. He asks Lisette to take Ruggero to another room for a little while. Rambaldo approaches Madga and demands to know why she is disguised and behaving so oddly. She tells him nothing. Rambaldo wants Magda to leave with him, but she says she is in in love with Ruggero. Sadness sweeps across Rambaldo’s face, so she apologizes for causing him pain. Rambaldo cannot compete with true love and says he won’t try to change her mind. After he leaves, Lisette brings Ruggero back to the table. He and Magda confess their love for each other and decide to live a new life together. Magda worries that she is lying to him by hiding her past.

ACT 3   For several months, Magda and Ruggero have lived a happy life on the French Riviera but their extravagant lifestyle begins draining their finances, Ruggero writes to his mother asking for money along with her consent to marry Magda. Ruggero blissfully imagines his life with Magda and the children they will have. Magda is moved by his thoughts but fears he and his family will reject  her because of her past as a courtesan if he learns the truth. When he leaves to post the letter, she contemplates whether or not to confess. A knock at the door brings Prunier and Lisette. When Magda left Paris, Lisette took up several jobs, including singing at a music-hall but her performances were abysmal. Now Lisette begs for her old job back. Magda thinks it over and agrees to hire her again. Prunier is surprised that Magda is able to be happy outside of Paris. He tells her that Rambaldo will accept her on any terms, but Magda refuses. Prunier leaves and Lisette resumes her duties as a maid. Ruggero returns with a letter from his mother. She writes that if everything Ruggero has said of his fiancée is true, then she has no worries that the couple will be happy together. She includes a request that Ruggero give a kiss to Magda on her behalf. Magda cannot hold the truth in any longer. She tells him of her past and how it will shame his parents. Afraid they’ll never accept her, she decides to return to Paris. Ruggero pleads for her to stay, but she flees to the arms of her protector, Rambaldo, leaving Ruggero devastated. 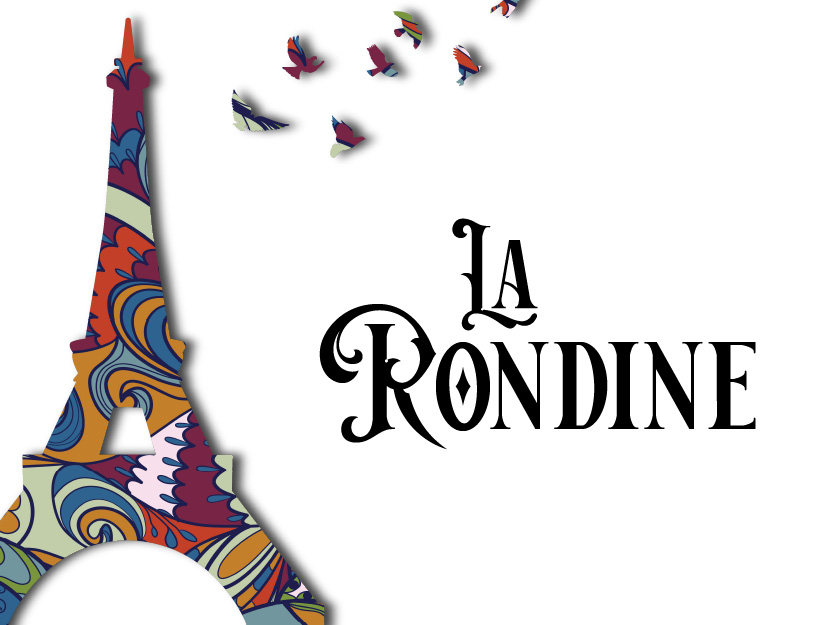