Corporal Moralés and the dragoons idly watch people passing in the square until Micaëla, a peasant girl from Navarre, approaches and asks for Don José. She is told that he is expected shortly. She wisely declines the dragoons’ invitation to wait in their guardroom and escapes, planning to return later. A trumpet call announces the relief guard and Moralés tells José that a girl is looking for him. The factory bell rings and the men gather to watch the women take a break from their work at the cigarette factory. The gypsy Carmen is the favorite but she teases them with the famous Habanera which claims love is like a wild bird that cannot be tamed or bound. Only one man pays no attention to her – Don José – so Carmen concentrates her attention on him and playfully throws a flower in his face. The women go back into the factory and the crowd disperses. Micaëla returns to find Don Jose alone. She has sent Micaëla to tell José that his past is forgiven. Micaëla delivers a letter and leaves in embarrassment since it suggests that he marry her. Just as he decides to do just that, a fight breaks out in the factory. Zuniga, the officer on duty, sends José to investigate. The girls quarrel as to what has happened and who is at fault, but it is certain that Carmen has cut one of the girls with a knife. Carmen insolently refuses to answer Zuniga’s questions and José is ordered to take her to prison. While Zuniga prepares the order, Carmen notes that José has kept the flower she threw at him. She seduces Jose with a promise of dancing at Lillas Pastia’s tavern outside the walls of Seville. The lure of a tryst convinces José to help her escape. He loosens the rope, falls away when she pushes him and  Carmen escapes.

Carmen and her friends Frasquita and Mercédès entertain Zuniga and others at Lillas Pastia’s tavern. Zuniga tells Carmen that José was demoted and is serving her sentence for letting her escape, but is due for release. Carmen is overjoyed at the thought that someone made that sacrifice for her. The famous matador, Escamillo, is heard passing and stops in to entertain everyone with his description of a bullfight – the exciting Toreador Song. Escamillo then propositions Carmen, but she replies that she is otherwise engaged for the moment. He says he will wait. The smugglers Dancaïre and Remendado enter with business for which they need their female accomplices. Frasquita and Mercédès are game, but Carmen refuses to leave Seville: the mercurial gypsy has fallen in love. José approaches and the smugglers tactfully withdraw. Carmen chides José for not using the file and money that she sent him concealed in a bread roll, and remarks that she has been dancing for his officers. When he reacts jealously, she agrees to dance for him alone but as she does, a bugle calls him back to quarters. As José prepares to leave, Carmen mocks him for his callowness, but he answers by producing the flower, telling her how it’s faded scent sustained him during the long weeks in prison (the exquisite Flower Aria). She tests him, asking him to desert the army and join her in a life of freedom in the mountains. When he refuses, she reacts contemptuously. As he is leaving, Zuniga returns. In a jealous rage, José attacks him. The smugglers rush in, separate them, and José now has no choice but to desert and join the gang of outlaws.

The smugglers pause for a brief rest in a mountain pass while Dancaïre and Remendado scout ahead. Carmen and José are quarrelling and Carmen advises him to go home to his mother. The women turn cards to tell their fortunes (The Card Trio): Frasquita and Mercédès foresee rich and gallant lovers but Carmen’s cards spell death. She calmly accepts the prophecy. Remendado and Dancaïre return with news about the custom guards ahead. The women know how to deal with them and all depart. Micaëla enters, fearful of the dangers and terrified of being confronted by the woman who has turned her true love into a criminal. She hurries away in fright as José shoots at an intruder, who turns out to be Escamillo, searching for Carmen. José challenges him and they fight. Carmen intervenes to save Escamillo who gallantly invites everyone to the next bullfight in Seville as he leaves. Micaëla is discovered. She begs José to go to his dying mother and he José has no choice but to go. He angrily promises Carmen that he will find her. As José and Micaëla leave, Escamillo is heard singing jauntily in the distance.

Outside the bullring in Seville, Carmen enters on Escamillo’s arm. Frasquita and Mercédès warn Carmen that José is nearby. A warrant is out for his arrest. Carmen says that she is not afraid. José finds her and begs her to forget the past and start a new life with him. She tells him calmly that everything between them is over: she was born free and free she will die. While the crowd cheers Escamillo inside the arena, José tries to drag Carmen away. Losing her temper, she takes  José’s ring from her finger and throws it at his feet. José, in a fit of rage, stabs her to death. 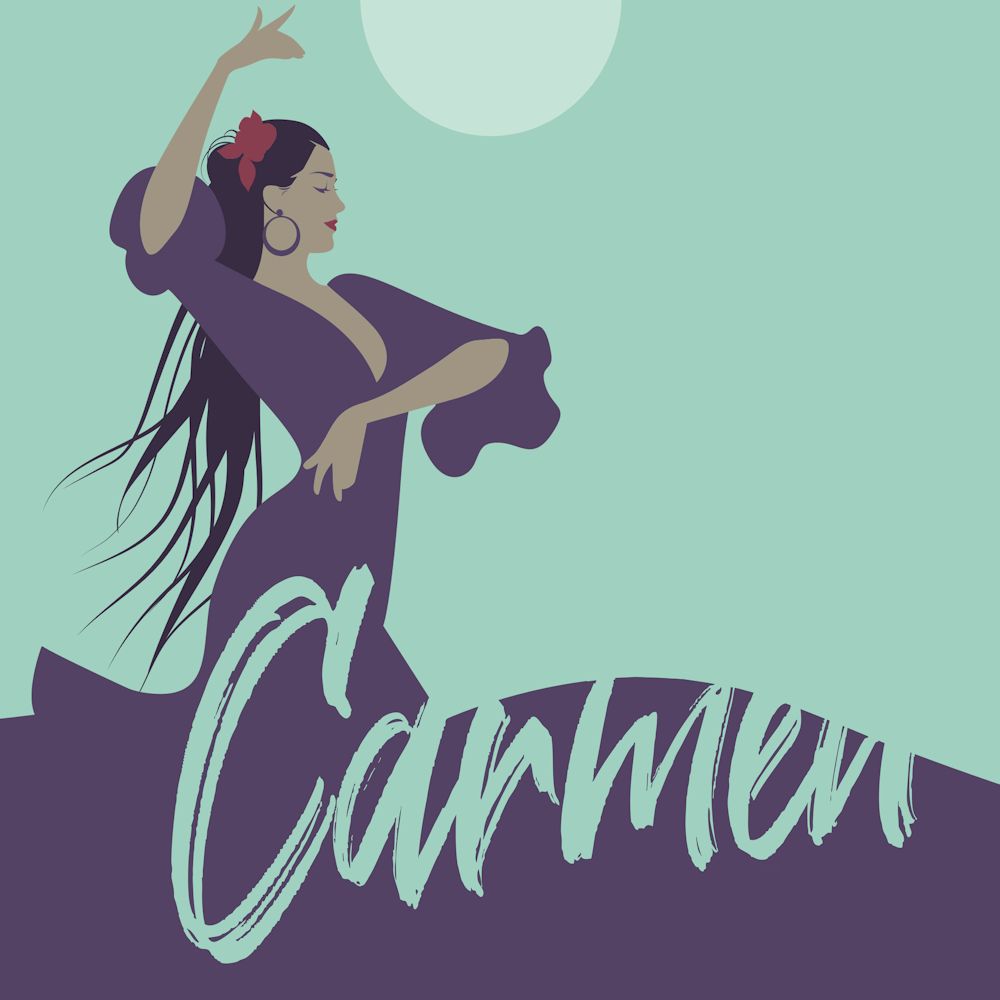